Raindrops keep falling on my head
And just like the guy whose feet are too big for his bed; Nothing seems to fit
Those raindrops are fallin’ on my head, they keep falling

So I just did me some talking to the sun
And I said I didn’t like the way he got things done, sleeping on the job
Those raindrops are fallin’ on my head, they keep falling

Raindrops keep falling on my head
But that doesn’t mean my eyes will soon be turning red; Crying’s not for me
‘Cause I’m never gonna stop the rain by complaining.

(Because I’m free, nothin’s worryin’ me.)

It’s been pouring with rain today but actually I felt that was a good thing as it felt cool on my (thinning) hair. I reckon 30% of my hair has fallen out just during the course of the day today – admittedly with some help from me.

It’s like when you’re young and you get a wobbly tooth. You’re either someone who gets all worried and won’t touch it or someone who, having found it, will worry at it until it’s out completely. I’m the latter. I’m a spot picker, eyebrow plucker, tooth wobbler, scab picker… you get the picture. So as soon as my hair started looking a bit loose there was something alittle bit delicious about running my hands through it and then counting the successful crop of broken-off hairs – after all, it seemed to me that they must have just been lying on my head, unconnected to anything. So it’s not like I pulled them out, right?

But actually the fun bit is spotting a grey hair and then as you touch it, it falls to the floor. Normally those buggers are the most stubborn ones in your head. And curly! I mean, they are the helter-skelters of hair, and there’s no way to get them to lie flat against the other hairs. So I end up with these little white spiral antennae sticking out of my head. Now, those are just as likely to fall out of my head as any other… Goodbye, and good riddance for a few months!

I had my checkup at the hospital this morning, involving 3 blood tests, which were done by a rather clever looking machine on a “while-you-wait” basis. Whilst those little test tubes of my blood were being centrifuged, I followed my oncologist, the eminent Professor Robert Thomas, to his office. He had just greeted me warmly and told me I should be pressing down on the little cotton wool pad on my arm; and since I didn’t appear to be doing it correctly he even did me a demo which made me laugh.

We discussed my diet and general wellbeing, and I was able to check with him whether I should be worried about drinking orange juice with my tablets. There are various studies to suggest that whilst Grapefruit juice can cause sero-concentration of some chemicals, which could possibly mean they reach toxic levels in the bloodstream. The effect of Orange juice is the opposite – it can reduce the absorption of some chemicals – antibiotics in particular.

Professor Thomas advised that since I’m only taking the antibiotics as a prophylactic treatment, e.g. preventatively, it won’t hugely matter if the efficacy is reduced to some degree as that may well be balanced out by the benefits of drinking orange juice, which is particularly useful in helping the body absorb iron –  and since I’ve been a very good girl and been eating spinach and beetroot like it’s going out of fashion, the orange juice has probably been a contributing factor to my reasonable haemoglobin levels. Iron is used by the body in haemoglobin – forming a porphyrin ring that can reversibly bind oxygen – e.g. pick it up and carry it around the body.

Anyway… I’m getting ahead of myself. The blood tests came back very quickly and showed that the haemoglobin levels were ok (red cell count, carries the oxygen around and helps keep your energy up!) but that my platelets and white cell counts were lower than Dr. Thomas would have liked. However neither he nor I were keen to delay this week’s chemo cycle so he had a look at my treatment plan (FEC) and said he’d reduce the dosage of 5Fluorouracil and Cyclophosphamide by about 5% just for this one cycle – which should help my body bounce back a bit – particularly with  Cyclophosphamide as apparently that’s an immune response inhibitor. The Epirubicin, which is the one that makes my hair fall out and does a lot of the DNA-replication-attacking goodness, is staying at the same level. 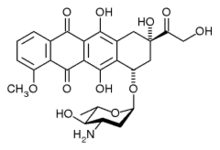 Although having low white cell counts is slightly worrying in my head, the other thing he did was prescribe a white-cell-count-boosting agent with a Granulocyte Colony Stimulating Factor – which basically makes my bone marrow go into overdrive to produce more white blood cells. The side effects might be achy bones etc. but it’s less likely I’ll be admitted to hospital with any health problems related to a compromised immune system. I’m just hoping it can all be one injection tomorrow, not one per day as I hate needles!

Considering the raft of side-effects that one can get, I think I’ve been pretty lucky:

So far I’ve just felt a bit tired and lost a bit of hair.

Part of the secret (I reckon) is that I’ve been using aqueous cream in the shower instead of shower gel – it’s my new best friend. Suddenly my skin has never been in such good condition! My sister recommended it because she uses it for her boys (they get eczema). I’ve also been using Aveeno cream (made with oatmeal) and some nail bed balm which is made from virgin olive oil, raw shea, cocoa butter and other oils with antimocrobial properties. Begone, you dry patches! 🙂

But still, I’m not saying that the hair loss has been nothing. It’s been stressful. For someone like me, who’s never been massively confident about their appearance, it’s been really quite hard to take.

I had a window of time for about 12 months after I had my (2nd attempt!) braces removed where I actually looked at my face in the mirror and gave myself a nod and a smile. I never keep my hair that tidy but that’s not going to change any time soon! But I was happy with that face looking back at me. And to have that all taken away again now with strange lank wispy hair that’s falling out all over my pillow and my clothes is a little bit heartbreaking for me.

I’m sorry if that’s vanity, but it’s my identity that’s being changed and I don’t like that it’s happening without my permission. So it makes me grumpy and frustrated, and I damned well want to dictate the pace that my appearance changes. It’s like diving into cold water… once you do it’ll probably be fine, but why would you want to?

Anyway… so I need to cut off my hair, and I want to because it’s all falling out and getting all over the bed, pillows, my clothes, the carpet, the bath (blockage city!) and is just a bloody nuisance. It’ll be better to facilitate its removal – and not like I have been doing by running my hands through it! But I wonder how I’ll feel when there’s someone new looking back at me in the mirror; I imagine I’ll feel just a bit sad.

Lyrics written by Hal David and Burt Bacharach for the 1969 film Butch Cassidy and the Sundance Kid.

One Reply to “Raindrops keep falling on my head”