These people ’round here
With their beat down eyes sunk in smoke dried faces
They’re resigned to what their fate is
But not us, (no never) no not us (no never)
We are far to young and clever
(Remember)
Toora loora toora loo rye aye
Eileen, I’ll hum this tune forever

Today was both weirder, better, and different from the one I expected. Day 1 of Chemotherapy was more stressful before it started than after it finished. I am very glad now that I opted to have the treatment at home – (and I do feel very lucky that it was even an option for me, as it’s a service offered by my health insurance). It was much more relaxed and less like “being ill”, to be at home for it.

I started the day with a Tweet, to let anyone who didn’t already know, have a chance to catch up on the fact that I have to do this today. And as I have it hooked up to Facebook, there were a number of really lovely messages on there from people who are wishing me well.

My sister was with me for the treatment, I knew she would be great company and be the right level of calm for that – she’s very funny, fun and irreverent and she was very good at distracting me whilst I was being a human pincushion.

The cold cap machine was pretty daunting-looking when it was delivered this morning! I especially didn’t like the blue fluid but was happier when I knew it was going in the machine and not me. 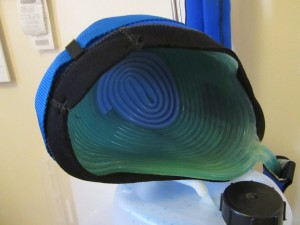 <geek>The strange cap reminded me of a Time Lord’s cap – though I can’t remember if it was from the Dr Who 5 doctors film!</geek> Anyway… I wasn’t that fussed for wearing something that’s cold and extends my treatment by another 2-3 hours, and only might stop some of my hair falling out for a few more days. So I said I would try it, anyway.

The bloody thing was exactly like putting an ice block out of the freezer straight on your forehead. And that’s something I don’t recommend, let alone for 3-5 hours – Yes – HOURS. I lasted about 45 seconds before I had made a very simple decision based on this equation:

Pain (like an ice cream headache) constantly for 5h

Um, no. Not really my cup of tea… Alternatively I use this equation:

Not having 40 hours of constant self-inflicted head pain.

Anyway, I’ve already told everyone that my hair is all going to fall out. Even though I may look a bit odd when I have patchy hair, I can live with that, because it doesn’t involve additional, self-inflicted pain! So I will go with plan A – have my hair cut short and some rapid investigations into wigs, hats and scarves.

The nurse administering my treatment was chatty and very good at going at the right speed with the chemicals and making sure my arm was warm so it didn’t feel so odd when those cold chemicals were going in the cannula. I had FEC today:  Fluorouracil (5-FU), Epirubicin and Cyclophosphamide. Epirubicin is the one that makes your hair fall out and your fingertips and toes tingle. It’s bright red; it’s a very good idea to mirror nature when presenting people with dangerous chemicals I think.

I had a couple of other visitors in the day as well. One was my friend whose partner’s funeral is tomorrow; he’s very funny and despite all of the stuff he had to arrange for tomorrow, is so mega-organised he had time to come and drop in to make me laugh. I hope I can be a friend to him as well and there’s very little that could stop me going to that funeral tomorrow. He dropped in some juicing books and made a recommendation for the juicer I should buy so I can make all sorts of disgusting-looking (but nice tasting) things  that are very good for me and my blood cell count. Hurray!

One of the books he lent to me was this one:
Juice Master Keeping It Simple: Over 100 Delicious Juices and Smoothies[Paperback]

The juicer was the one I had in my wish list anyway, so the “One-Day 1-Click” button became all too tempting:
Philips HR1861 Aluminium Whole Fruit Juicer with Juice Jug and Cleaning Brush

Another friend arrived as he was leaving, almost in shifts so that worked out very well! She’s very good company too and we talked about girly things like feelings and being grumpy and hormones and so on. “Urk!” You may say, but for me, a good old whinge and gossip was a marvellous distraction from feeling tired and a bit headachy. Phone calls from family and text messages from friends wanting an update have also kept me busy this evening, which is great.

Oh and Why Dexy’s Midnight Runners? I found it a very useful song to chivvy myself along with all day for some reason. Probably the beat of it. It’s a bit like an army march.

Comments Off on Come on, Eileen